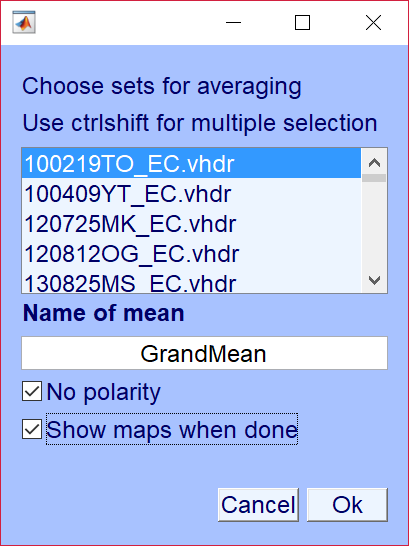 Alternatively, the analysis step can also be started on the command line or using a script. In this case, the function to be called is

where the ALLEEG contains all EEG data, EEG is the data structure with the obtained clusters, com is a string with the command necessary to replicate the computation, Index indicates which elements of ALLEEGs are to be used for the averaging, ShowWhenDone allows an immediate display of the resulting mean microstate class maps, MeanSetName is the name of the new EEG dataset, and IgnorePolarity makes the algorithm to flip (multiply by -1) some maps for a better commonality. The DoMeans allows you to select if you want to average individual microstate class maps (= 0), or to opt for the averaging of mean microstate class maps (= 1).